In March 2022, JPEX announced the plan to launch the platform token JPC and the trading of JPC was officially launched on August 8 this year. According to the report, JPC represents the utility token of the JPEX platform. With JPC, people will have the following rights and interests, including waiving the transaction fee, exchanging rights at the game hall, paying the on-chain transaction fee, promising mythical creatures for more economic benefits, staking a specified amount to receive benefits from friend rewards, etc.

Recently, before the opening ceremony of the FIFA World Cup, by promoting voting for the champion of the World Cup, JPEX is setting deep forth into the soccer area again, empowering its JPC token, and emphasizing JPC serving the purpose of utility pass for the “platform and sports” ecology.

The warm-up activity–voting for the champion was meant to let the JPC holder predict participate in predicting the champion of 32 teams in the World Cup, holders who successfully predict the result will share prizes up to 1000000USDT. Users must stake their JPC tokens into relative pools to get the voting right. Besides, the staking pool also has APY, which means users can get returns even if they are not able to predict the result.

The staking will have three different stages: from Oct 10th to Oct 16th, Oct 17th to Oct 30th and Oct 31th to Nov 20th. All Participants who stake the required amount varying in different stages have the voting opportunity, but the APY will be different: the earlier you participated in, the higher the APY. Users can redeem their JPC assets after the end of the activity, Dec 18th. This activity will decrease the circulating supply of JPC tokens, incentive its price to rise, and forms the crypto boom driven by soccer culture. 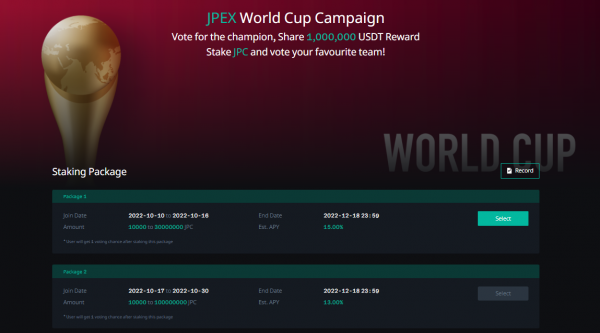 The activity demonstrates that JPEX‘s deep layout in the football area, JPC will furtherly connect with sports culture, and becomes the utility pass of the sports culture, especially football. Compared with other popular fans token, JPC is backed by JPEX ecology and its value will be furtherly concentrated and gives positive feedback the JPEX’s ecology.

With the approaching of the FIFA World Cup Qatar 2022, the world Cup fans economy once again becomes the hot topic of crypto investors. JPEX is a world-renowned crypto asset service provider from Australia, maintained by developers from Japan, Australia, the United States, and many other countries together, with stable improving development capabilities and keep creating. For example. The first NFT INDEX contract launched recently became the major risk hedge investment vehicle for NFT asset holders and won a great reputation in the market.

As a well-established trading platform, JPEX not only sets forth in sports sector, also expands its business globally, especially in Australia and Dubai. Currently, JPEX is regulated and licensed to engage in cryptocurrency activities in the U.S., Canada, Australia, and other countries. JPEX’s launching the VISA debit card with Simplex is also making web2 users adopt to web3, and it will lay the solid foundation for the globalization of JPEX.

JPEX has a good reputation in the crypto industry. JPEX successively won the “Excellence Blockchain Asset Trading Platform Award” in “Excellence Brand Award” held by Oriental Daily News and on.cc, and the “2021 Outstanding Blockchain Asset Trading Platform Award” by Elite Brand Awards and the“2021 The Most Influential Brand in the market” by the Golden Gull Award. Besides, JPEX also becomes the first sponsor in the history of Blockchain Fest in June 2022. It also raised the peers’ attention and discussion. Meanwhile, in the Crypto Expo Dubai held in Oct 5th, JPEX became a silver sponsor again and won the “2022 The Best Staking Platform”. It is because of the positive recognition by the industry that JPEX can continuously make new progress.

JPEX, a rising star in the web3 sport sector

The FIFA World Cup Qatar 2022 will begin on November 21, 2022. As a quadrennial carnival event, the FIFA World Cup Qatar 2022 arouses the appetite of football fans all over the world. Since the last century, sports have been a powerful carrier for business. There will be a boom in peripheral industries every time when major sports events are approaching. On the eve of the FIFA World Cup Qatar 2022, business giants are ready to maximize their business returns.
Without doubts, as a popular culture with a sustainable driving force, sports is penetrating various aspects with different forms. In the meantime, it is organically combined with other business opportunities to continuously form new business models. It also has a great chance to drive the development of the web3 world and also become a hot topic. Sports is a globally popular and driven culture that permeates all sectors in various forms. It is constantly being combined with other businesses to build new ones. It will become the new power and passion of Web3 world development.